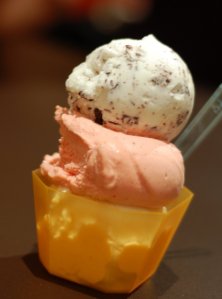 Wow! I cannot believe it has been seven weeks. The time has seriously flown by. It probably doesn’t hurt that I have been super, ultra, unbelievably busy. It was a great week for weight loss. Even with all of the baking going on, I still lost weight. I feel this amazing sense of accomplishment, not just because I managed to bake cheesecake and tarts and lose weight, but because I didn’t hate my body this week. Not even once. I actually caught myself looking in the mirror and thinking that I looked good. Now, that’s not to say that I didn’t have moments when I was less pleased with my actions than other moments, but it was about what I was doing not who I am.

Week six, because of the gain during week five, caused me to be a bit paranoid. I became a slave to the scale that week. I seriously weighed myself every morning and every night…old habits die hard. Anyway, that didn’t do a whole lot for me. Yes, I did lose weight last week, but I was consumed with it. This week, I just let go. I counted my points faithfully…even the three scoops of gelato pictured above (the fruit flavors are only two points a scoop), and just let go. I did get on the scale on Sunday, I think, and I was a little surprised by how much weight I had lost in three days…but I attributed much of that to my run on Saturday and possible dehydration. Nice, I know. Anyway, after that I reminded myself that I really don’t need to watch the scale if I’m on my points game. So, I let it go.

I think so much of weight loss success depends on discovering yourself. Who you are. What motivates you. Why you eat. Why you don’t exercise. How you deal with uncomfortable food situations. When you tend to overeat. And so on. I had a week of self-discovery.

Let’s start with the baking. I think I have finally discovered that, while I love eating treats, what I love even more than eating treats is making them. I know that may sound strange, but it’s true which is fantastic since my sister and I plan on opening a bakery of sorts (mainly treats) in the next ten years or so (we are planners) and, while I’m very excited about this prospect, it has made me nervous because I do love treats. It felt so good to bake up a storm, share a mini-cheesecake and a small tart with Sarah and be done (did you see the picture of the “ugly” tart?..that’s the one we had to eat). I tasted them, so I knew they were edible and to enjoy the fruits of my labor, and I was done.

Not only that, but there was an emotional disconnect between me and my food this week. I wasn’t in battle mode. It was so nice to be at Amanda’s shower and not worry about the food. I planned for it, so I happily enjoyed a little of everything (even a few mini tarts) and felt good and satisfied. It really is all about portion control and planning for me. I am not at the point where I can just pass up spinach artichoke dip, so I plan for it. In fact, I think that’s kind of my weight loss mantra: until (or unless) I can pass, I have to plan and portion. And do you know what? I know very few people (even the skinny ones) who can pass on tarts and cheesecake. And no, my goal is not to make anyone else fat. I just really like making yummy, pretty food.

Another helpful discovery is that I have this weird mentality when it comes to points. I like to hoard them until the evening. Just in case. In case of what, you ask? Well, in case I get a sudden hankering for ice cream. In case a friend calls me up and wants to go out to eat (although, my budget has slowed that one down…yes, the spender is getting thrifty). In case I decide I just need chocolate. Now, that may not be the case for most people, but it is for me. I think that, perhaps, as time goes on, this will shift. In fact, I have already discovered that my “full meter” has become much more sensitive, which makes it hard to get all of my points in by the end of the evening if I have too many left after work.

And one more minor victory: I had a complete breakdown last night. They don’t happen very often these days, but going a million miles an hour for days in a row, combine that with being female and an uber emotional one at that, and some serious sleep deprivation and you have recipe for Bawlfest (like Oktoberfest, only with more tears and less drinking). But a good cry now and then can be a good thing, especially when you realize that sleep is a much better solution than ice cream.

I haven’t said a lot about my meetings, but they are fantastic. I don’t know that I always need the lesson that is being given. Like tonight’s, for instance, was about moving more (read – exercising more). Not something for which I necessarily needed motivation. But, there is this great sense of camaraderie among all of us at the meetings. It’s great to hear what is and isn’t working for people. And, much to my surprise, it’s really fun to have everyone get excited and clap for you when you’ve reached a goal, whatever it may be. The truth is I hope to one day be a class leader for WWs. I just think that would be so great. Dorky? Maybe. But great? Definitely.

Next weeks topic: “I am not what I weigh.” I am pretty excited about that one, especially since I feel like I have come such a long way in the last seven weeks.

I have also discovered a great trick when I start to think something negative about myself. I just imagine saying the things I’m about to say to myself to someone else. It works almost every time. Why is it that we are often so much meaner to ourselves than to anybody else? It’s kind of sad, really, but I’m learning.

So…I lost a whopping 3.8 lbs this week…bringing my grand total to 19 lbs in seven weeks. Woohoo! And, even better than the weight on the scale, I wore this cute, fitted, white cotton top today that zips up the side and it looked great. I have not been able to wear that for over a year. In fact, while I am 1 lb away from losing everything I gained this last year, I am pretty sure that I am smaller than I was then. I’d have to measure to be sure, but things are fitting better.