I know there are a number of people who question my love of Seoul, but I love it. Maybe because it was my first Asian city outside of Japan. Maybe it was because when I went for the first time it was magical. Maybe it’s just my love of Korean food. Whatever it was, I fell in love right away, so I was happy to go again when my dear friend, Oliver, told me he was going to be there for work. His wife very kindly gave him the “ok” to head out of the country a few days early so we could meet up and play tourists. And to make the trip even better, I got to stay at my friend Jaclyn’s house and visit with her. It was another amazing trip!

And here are my favorite things to do in Seoul. (These are just in chronological order from this trip.) One quick tip for all attractions: be sure to check what days places are open as there are a lots of things closed on Mondays and some on Sundays and Tuesdays.)

DMZ/JSA Tour – I did the DMZ tour on my first trip to Seoul and loved it, but I didn’t realize at the time that there was a difference between a tour of the DMZ and a tour of the
JSA. The JSA requires a bit more advance planning (the tours fill up fast) and it’s the only area where you can actually set foot on North Korean soil from South Korea. So, this time I made sure that I got to do a tour of both. It was amazing. And intense. And I highly, highly recommend it. I booked us through a company called Cosmojin and they were fantastic. 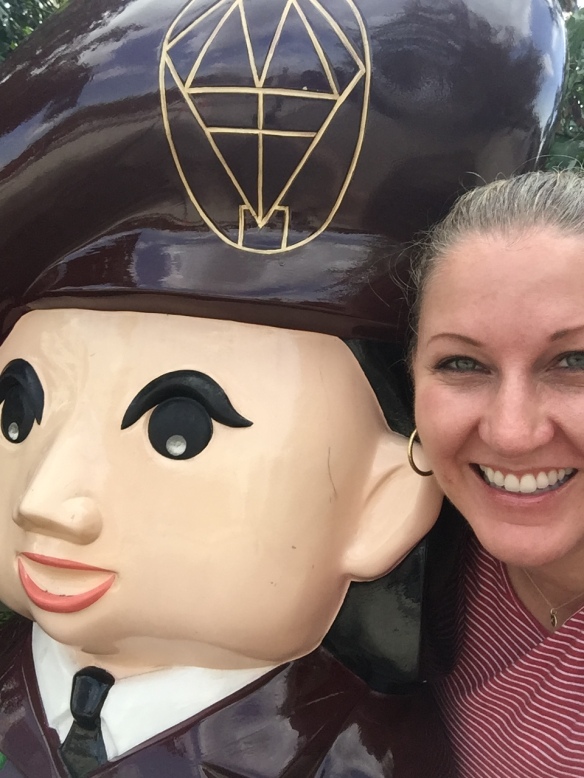 That little curb between the two buildings is the border between South and North Korea. You can even see a North Korean soldier standing at the top of the steps in from of the large building in the background.

Itaewon – this is a cool little neighborhood that reminds me of a tame Harajuku. Great restaurants and lots of people watching. 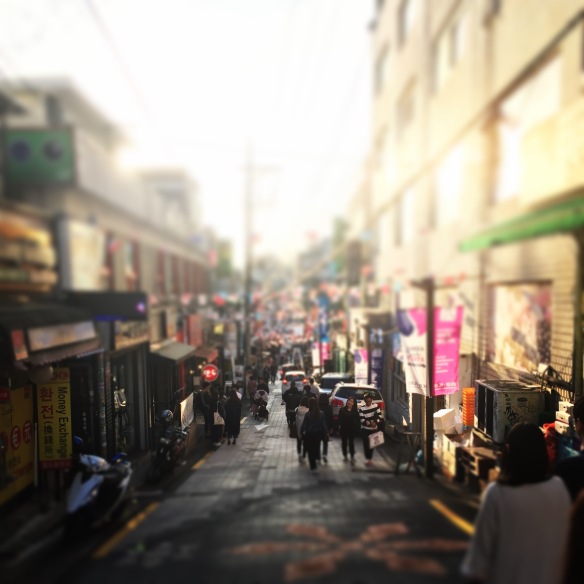 Nanta – This is a kind of musical / performance art / comedy show. I don’t know how else to describe it, but it’s super fun and equally ridiculous. This was the second time I’ve seen the show, but it was made even better that the first because Oliver got called up on stage and he was perfection. They said no photos, but of course I managed to sneak a few.

Myeong-dong – This is one of two central shopping districts in Seoul. I like this one because it’s not too huge and crazy AND has amazing food stands. Olive made a great partner in food adventures, which is needed you’re going to try everything you want to without wasting a ton of food. 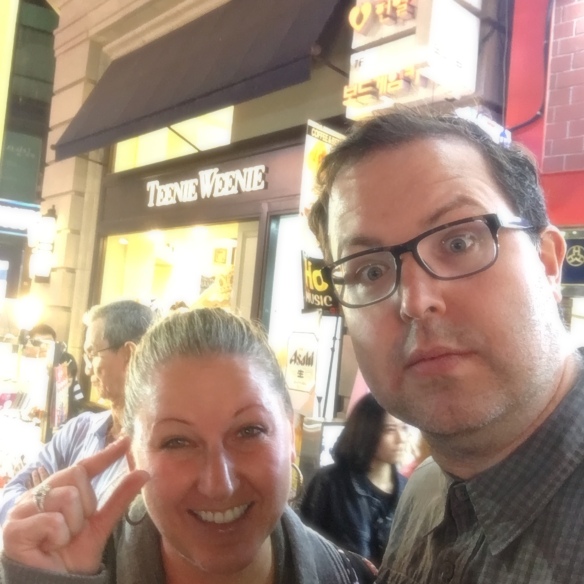 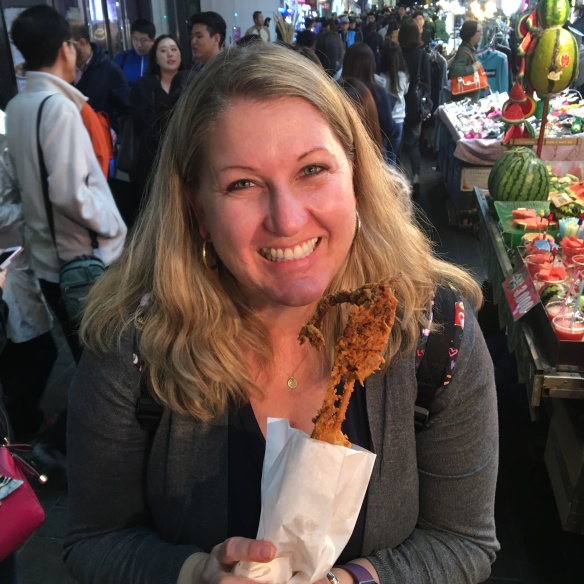 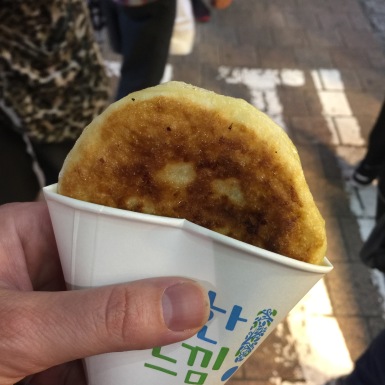 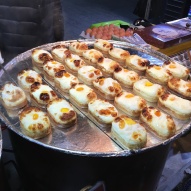 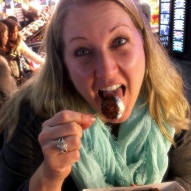 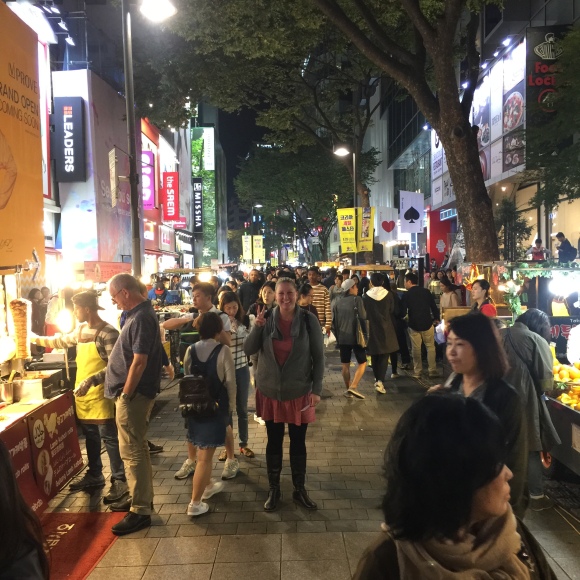 Changdeokgung Palace Secret Garden Tour – The palace itself is impressive, but it’s the Secret Garden that really makes this one worth visiting. It’s absolutely stunning. During peak times in the fall and spring it can be difficult to get tickets, so plan ahead. It’s one of my favorite palace/shrine/equivalents in all of Asia.

I love doors, especially old ones in gates or walls. This one was so pretty. I wish my photo did it justice. 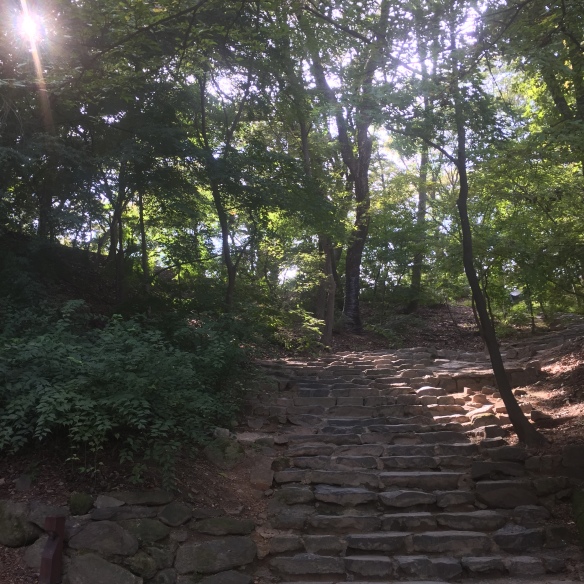 The War Memorial of Korea – My friend Heather took me here the first time I went. It’s such an interesting place. And bonus, this time, there was this amazing Korean calligraphy temporary exhibit. There’s a beautiful exhibit of a teardrop made from dog tags that I absolutely love, as well. In addition to this, just around the corner from the museum is this amazing little hole-in-the-wall fish place. We weren’t able to make it because it was closed the day we went, but if you can go, do it!

Gyeongbokgung Palace and the Nation Folk Museum of Korea – These are basically connected so you can plan to do them both on the same day. This palace is massive. In addition to that, they do a kind of “changing of the guard” which is very fun to see. (I didn’t take any photos of the Museum because we didn’t go there this trip…no time…but you can see my photos from my first trip here.) 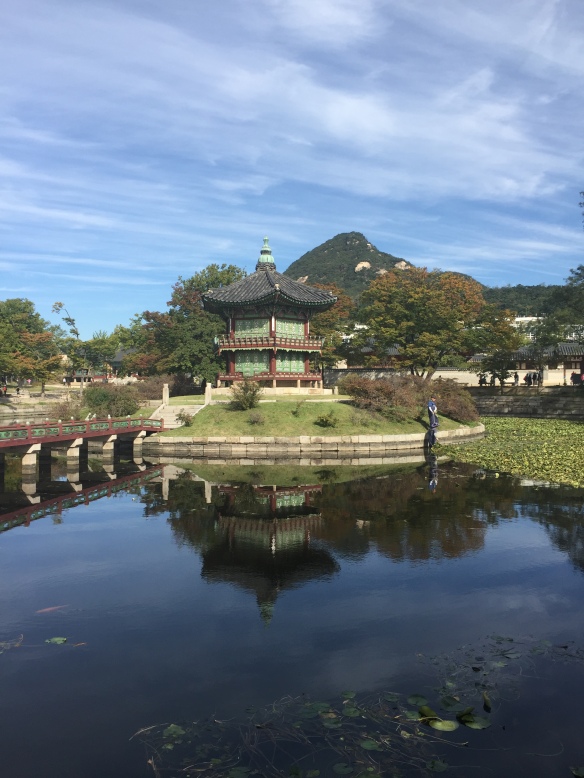 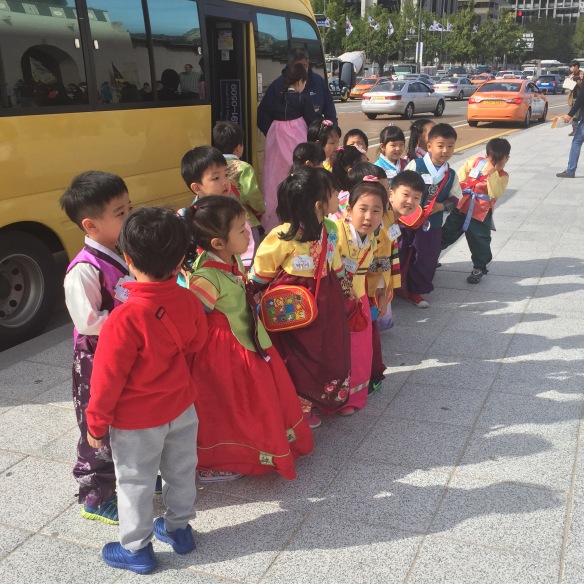 How adorable are these munchkins?!

Oliver: “I am walking where Psy walked.” 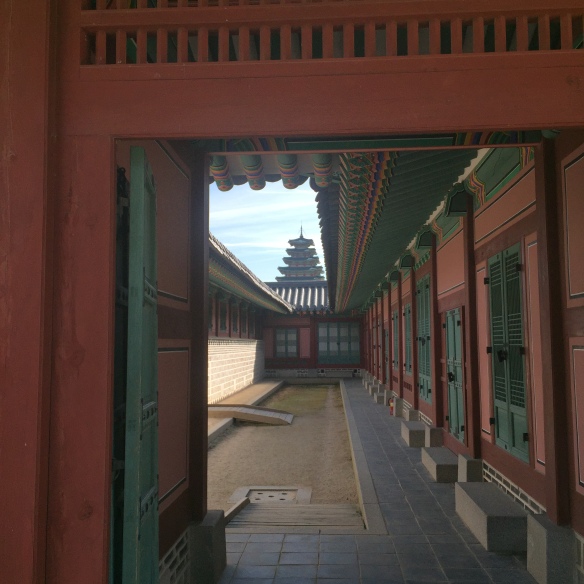 Janet’s Cooking Studio – I’m sure there are several Korean cooking classes you could choose from, but Oliver and I both loved this experience. Janet is a native Korean who spent much of her life in the U.S. Her English is perfect, as is her knowledge of Korean culture and food. We started with a tour of a local Korean market (we were the only foreigners there) and it was absolutely delightful. We tried some new fruits neither of us had heard of before and then got to taste roasted seaweed fresh out of the roasting machine thing (I have no idea what it’s called). It was so very good! This was followed by cooking five Korean dishes in her darling studio. There were two things from the class that really stood out to me about Janet as an instructor. 1) She adapted the recipes slightly so that we would be able to make them in America. While some people wouldn’t love this, it was nice to know we could recreate these in our respective countries. 2) She was very mindful of our skills and abilities and adapted her teaching based on that. As I love to cook and do it quite a bit, she didn’t spend as much time talking about the basics and she let me flip my Korean pancake (pajeon) which was super fun! 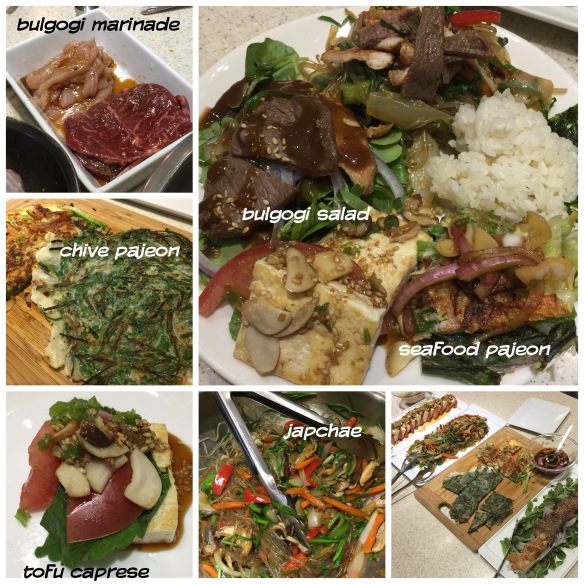 N. Seoul Tower – A total tourist trap, but well worth the views! I took no pictures this time as it was my third trip to the tower.

Insadong – This is another place we didn’t get to this trip, but it’s a great little tourist area where you can get all of your souvenir needs met with lots of yummy treats. There are also a number of great restaurants in there. You can see my pictures of this area here.

Finally, watch a Korean drama. Such an interesting experience. I can’t tell you where to do that because I did it in my friend’s home, but do it. You will not regret it.

I think that’s it…for now. This is in no way comprehensive. Just my favorites.