When I was a little girl, I spent a lot of time with my grandparents. My mom was pretty sick and in and out of the hospital and so, before I started school, I would spend most weeks at her house about an hour south of my hometown with my little brother.

The two of us would play in the backyard and go for adventures down to the creek with our grandpa. We’d go for walks with the dogs, play with trucks in the playroom, hide in the storage room, ride the big, red tricycle, and pedal the “surrey with the fringe on top” around the neighborhood. We picked tangerines off of the tree next door, went on trips to the dump with our grandpa, slid down the slide and swung on the bars on the play-set in the backyard. Besides the fact that our mom was sick and we weren’t in our own home, it was pretty idyllic.
I also have memories of my grandparents’ formal living and dining rooms; rooms we weren’t allowed to play in, but that I absolutely loved. Besides the pink settee that I still love, my grandma made these amazing flower arrangements and I have vivid memories of the beautiful birds-of-paradise and calla lilies she would cut from the plants in the backyard and subsequently turn into beautiful works of art using one of her many bowls and a little needle covered block called a frog. These arrangements stayed in the living room where they would not be destroyed by busy children with lots of energy.
This was the beginning of my love of flowers. And then my mom’s best friend in the world, Sydne, was an incredible florist (still is, in fact), which only added to it. A little later on in my life, when my mother was healthier and Justin and I had returned home for good, I would often spend late nights and early mornings with my mom over at Sydne’s. I would get to help her daughters put pearl pins in stephanotis or peel damaged petals off of roses in preparation for one of the many weddings she would be doing during any given week. It was so fun to be part of creating something so beautiful for such a special occasion. 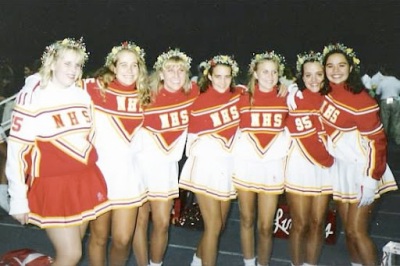 One of the last memories I have of my mom was of her and Sydne making these flower crowns for my senior year Homecoming game. I kept that crown in my closet for years afterward, hanging onto one of the last things I had that my mother had created for me.
Anyway, I share all of this to paint a picture for you. I know there are people out there who think flowers are kind of a waste, and I can understand that point of view. Clearly, though, I don’t share it. So, when I was home last month and made my 23-hour visit to Utah, mostly to see my grandma, I was thrilled when she gave me one of her ikebana books, some money to take a class, and the promise that I would inherit her containers and frogs. (Cousins, I hope you are committing what I just wrote to memory. 🙂 )
Since moving to Japan I have been wanting to take an ikebana class. This is the type of flower arranging my grandma has always done and she learned while she was living here in Japan in the early 70s. The book she gave me had a letter in it, written to her by a woman who I can only assume was one of her instructors. A letter dated 1983 and that cost 480 yen to send (the dollar was so much stronger then…). 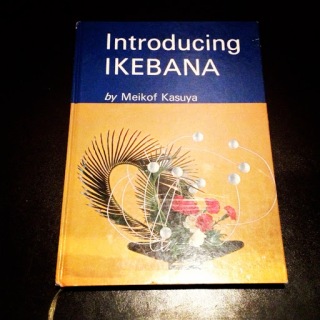 So, with a little research on the web, I found an introductory class in English that wasn’t ridiculously expensive. After a few emails back and forth, I scheduled my lesson for this past Saturday. It was everything I was hoping for and more. It started with a couple of demonstrations while my darling instructor, Reiko, explained some of the history behind the art of ikebana and and the different formal styles, including the type of ikebana she practices: Sogetsu.
She also taught me about the use of different plants and flowers and how each one is said to contain a deity, and so each one represents something different. When I was looking through my grandma’s book, as well as the one Reiko had, I found a number of arrangements that I did not find especially aesthetically pleasing, but after Reiko gave me this part of the lesson, I could see that the beauty of these arrangements was to be found in what they represented.

Reiko first demonstrated the basic upright style arranged in Nageire. To say I was enthralled would be an understatement. She showed me how to make supports in the container in order to position the flowers exactly where they should be. She explained the importance of space and density, angles and lines, colors and lengths.

She then demonstrated a more modern or freestyle arrangement; the type of arrangement you can do one you have mastered the basics.

And then it was my turn. Well, almost. First she demonstrated the most basic style, basic upright arranged in Moribana, using the same flowers I would be using. While I would have loved to have arranged it in Nagiere (seriously, creating supports from stems is just cool), I was so excited to finally be playing with a frog (aka kenzan in Japanese) having seen them so often during my childhood. And I was thrilled about the irises. I love irises.

It was so fun to being arranging flowers and to have to think about space and lines. Once I was done, we moved the arrangement from one container to the next, experimenting with different colors. I started with a navy blue container, then tried white, and finally decided this was my favorite, even though I didn’t think the colors would look good together, it just felt the best. And that was the end of my first class.
In case it wasn’t obvious, there will be more. And, on top of having this awesome experience, I got to take all of the flowers we used home with me. Once back in my apartment, I pulled out my little vase and went to work. It’s amazing how just one lesson in ikebana helped me so much in my western style of arranging flowers. I used space and variety more. I thought about angles and lines. And I was pretty pleased with the finished product. 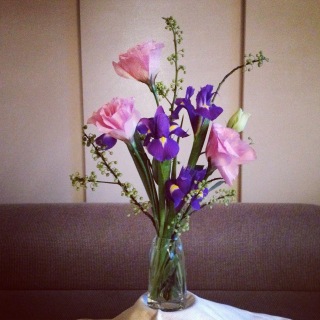 Of course I like to find metaphors in art whenever possible and I think ikebana, when compared with western flower arranging, is a perfect representation of how my life in Japan feels versus my life in New York. My life in New York was beautiful because it was full and I carefully fit as much into my days as I possibly could, ensuring I could see everyone I wanted to see and do everything I wanted to do and not miss out on anything. Like a western arrangement, it was about being full. And, as I said, it was beautiful.
My life in Japan, on the other hand, is not as full of people or activities. I am much more thoughtful about what I want to do and everything requires a little more effort because the culture and language are not native to me. I have to think more and do less. It is also beautiful, but it’s a beauty that is as much a result of what is there as what is not there.
And if I take this idea to its logical conclusion, the end result will be that, when I return to my New York City lifestyle, it will as one who has seen a different way and will be able to take the lessons learned from my life here to make my life there that much better, easier, and more beautiful. Kind of great, right?