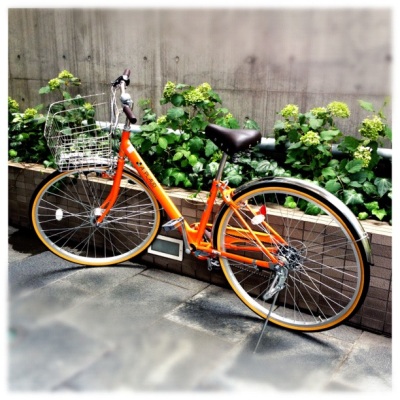 I bought a bike! Yesterday, I went with a friend to a little bike shop in her neighborhood and found the cutest bike ever (already fully loaded) for much less than my bike in NYC. I’m in love with it! Unfortunately, yesterday, the weather did not want to cooperate, but I wasn’t going to let that stop me from taking this beauty (I’m open to naming suggestions) for a spin.

I was going to head over to the Imperial Palace so I could actually see the grounds and take some photos. I know I work across the street, but it’s still way to hot and humid during the day to wander around on a work day when I need to look at least semi-presentable. So, I headed out with my backpack wrapped in plastic sitting in my oh-so-cute basket and the spirit of adventure in my heart.

As I discovered in New York, having a bike allows you to see the city in a whole new light. And in Tokyo, it’s even nicer because you can ride on the sidewalks, so you’re in much less fear for your life. And as I started out on my ride yesterday, I was so excited to see parts of town I’d never seen before, having only passed through them underground. Well, that excitement was short lived as it started to rain. I decided to keep going (me and rain…) because I’m incredibly stubborn and didn’t really care about what I looked like.

At one point, it was raining hard enough that I did take a little break under an awning, but I got tired of waiting (me and patience…). As I got closer to the palace, I realized I had taken a wrong turn and, as I was attempting to turn around on the very slick, tiled sidewalk (not sure whose idea that was…), my tire slipped. I didn’t fall or anything–shockingly–but it did cause me to look at my tire only to discover it was totally flat.

At this point, I was about four miles from my apartment and five miles from the bike shop and in Tokyo (unlike NYC) you can’t take your bike on the subway. It made for a very long afternoon. I’m sure I could have found a closer bike shop to fix it, but since I’d JUST purchased it, I wanted that bike shop to fix it for free. Which they did, after I took the five mile walk with the bike back to it. Stubborn to a fault.

All of that said, I’m still in love with my bike and so excited to start to really get to know Tokyo above ground (as it cools off). I’m also very happy that I am the person I am and that I see things like this as just another adventure. One of my favorites things about my life is how many great things have happened along the way that I couldn’t have planned for.

1 thought on “adventures in bike riding”