Perhaps I need to rename this blog Ways I am Making of Fool of Myself in Japan. But, then again, the current title seems pretty appropriate, for every day seems to present a new existential dilemma for me…or, in some cases, an existential crisis. Okay, maybe that’s a little dramatic. But only a little. Now, onto the actual post.

Friday night I was wandering around my neighborhood looking for a new restaurant to try. This is both an exciting adventure and a painful task that I get to experience every night. I so wish I spoke Japanese! And I would eat at home, but why when there’s so much good food out there that someone else has prepared and dishes that someone else will do?

Anyway, back to the story. I saw this amazing looking oyster bar, but all the tables were reserved and I did not want to sit at the bar because it was also the smoking section and, while I tolerate cigarette smoke just fine when necessary, I don’t really like it with my food. (I will be going back there sometime this week because, seriously, it looked incredible.)

So, I kept wandering and found myself down a little side street (which is most streets in Tokyo) and wandered past a restaurant with all of these lovely wind chimes tinkling in the evening breeze. I kept walking past because it was a sukiyaki/shabu shabu place, meaning it was both pricey and going to be way too much food for just me. (Don’t worry, I am making friends slowly, but I’ve actually been thoroughly enjoying my quiet life these past two weeks.)
After wandering down the street a little farther, I realized that the wind chimes were calling to me (wind chimes always remind me of my brother’s house, so that was probably part of it) and there was a waiter/host outside of the restaurant who just looked so very friendly. I headed back and followed the nice man down the stairs (everything is vertical in Tokyo, so it’s not uncommon to eat in the basement or on the 9th floor) and inside…where it was obvious that I was going to be asked to remove my shoes. I did so and then followed the host/server past a section of perfectly good, empty, western style tables to the back, where there were other diners and, yes, Japanese style table (i.e. floor level seating). Thankfully, it was not “sit cross-legged” floor seating (there was a lowered part for my feet/legs) because no one wants to think about what a disaster that might have been with my current dribbling issues. But still, is there a graceful way to sit on the floor in a restaurant? 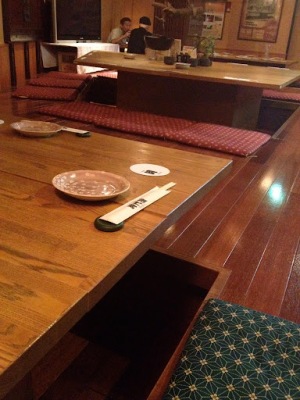 Once seated, I looked over the menu and decided to just get the sukiyaki (way to much food for one person), which came with a little appetizer, clear soup, sashimi, tempura, sukiyaki, and a little dessert. (Since moving here and dining alone most nights, I’ve learned to just be okay not finishing all my food even though doggy bags are not a feasible option most of the time.) The appetizers were just little vegetable dishes. The sashimi was pretty straightforward, minus the full shrimp (eyeballs and all) that stared at me. Apparently you are supposed to suck out the insides of the head. I am an adventurous eater, but even I have limits. Although you will see that they are pretty low. Then came the clear soup with, I kid you not, half a fish in it–fins and all.

So, at this point, I was very much looking forward to the tempura because that is always very straightforward. And the tempura came and there were no surprises. The waitress proceeded to prepare my sukiyaki (the pot is brought to the table and cooked right there on a little portable, gas range thing) and I decided to dig in to my tempura. I saw this little round blob sitting on on the paper. I wasn’t sure what it was (mushroom, maybe?), but I saw what was clearly tempura breading on it, so I pick it up and plop it in my mouth.
Well, that tempura I saw on it was just a little flake. I had just put a large blob of grated daikon (an Asian radish) into my mouth. And while nowhere near as hot as horseradish or wasabi, it still has a little kick to it and the last think I wanted to do was swallow this whole thing. Not only that, but having had tempura one other time since living here, I knew the daikon was meant for the tempura sauce…and I wanted it in the sauce!
See? Existential crisis.
I would love to tell you that I decided to be the upstanding, appropriate, polite, well-mannered individual that my mother and grandmother raised me to be. I would love to tell you that I just sucked it up and swallowed it. I would love to tell you that those ridiculous scenes in movies where people do ridiculous things like hold food in their mouths until they can spit it out without anyone noticing are just that: completely ridiculous and totally unrealistic. I would love to say all of these things right now, but I cannot.
There I sat while this waitress took, what felt like, five years to get the sukiyaki going with a huge blob of daikon in my not-so-very-large mouth. She’d look at me every so often (probably wondering why I wasn’t touching the oh-so-delicious tempura sitting in front of me) and I’d smile to the best of my ability with my mouth full of radish. Finally, she walked away. I glanced around at the two other occupied tables and made sure no one was looking at me. And then I did what you are all hoping and praying I didn’t do (only secretly happy I did because it’s going to give you a good laugh); I lifted the little sauce bowl to my mouth and spit the daikon into it. This might be a new low.
There’s a great quote by American author H. Jackson Browne, Jr. (I had no idea who he was until I looked for this quote) that states, “Our character is what we do when we think no one is looking.” Clearly, I have some character issues. I can happily state that had anyone been with me, I would have just swallowed the daikon. There’s just something about the anonymity of living in a very foreign country where I can barely communicate with anyone that affords me the freedom to be completely ridiculous. Which, as most of you know, is not my normal state of being when I am in my normal life. And while I probably need to get back to that place because this is my normal life now, there’s something so liberating about just not caring. (I think my therapist would be proud?)

Okay, back to the rest of the meal. For the most part, it proceeded without any more ridiculousness. The only part that was a little iffy was when the nice waiter brought me a raw egg in a bowl (to accompany the sukiyaki, as I learned) and I had absolutely no idea what to do with it. I communicated as much to him using very basic English and a lot of sign language (well, ridiculous hand gestures…it would be offensive to the deaf community to call anything I was doing “sign language”). Somehow, he understood what I was asking and showed me that the egg was meant for me to mix up and then dip my beef and vegetables in it–as in dip them and then put them directly into my mouth.

Since I was now in a state of complete ridiculousness given the daikon incident, I decided to just go for it. I am so thankful that a) I am pretty comfortable with weird foods and b) I have a stomach that can handle a lot. Plus, with all the cookie dough and brownie batter I’ve consumed over the years, I figured I was pretty safe with a little more raw egg. Although, had this been any country other than Japan, I probably wouldn’t have done it, but considering their high standards for quality, I figured I was okay. (Last night is was seared chicken–as in mostly raw–in my salad. I had already taken a few bites before I realized what it was, so I just kept going. One of these days my luck is going to run out, but for now, apparently I’m okay.)

And finally, there was dessert; vanilla ice cream and some sort of jelly something (consistency somewhere between jello and gummies). I have no idea what the flavor was, but it was delicious. 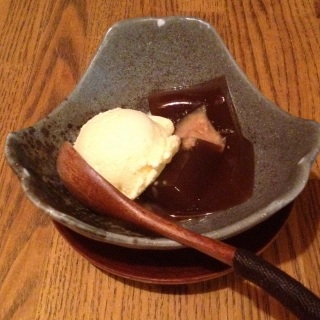 And with that, I paid my bill and stood up as gracefully as possible (which is to say not very gracefully at all) and headed home…laughing to myself the whole way. If nothing else, my time in Japan will be full of very entertaining memories.

4 thoughts on “and it continues”